If you have ever been anywhere near a writing group or book festival of any kind, you will know that writers come in all shapes and sizes, from big, robust circles, to tiny, stabby stars. They come in different flavours too, from cool, classic vanilla, to eyeball-exploding, triple-hot chilli sauce. Some of the nicest people around are writers, but some of them truly are mad, bad and dangerous to know.

Thrillers With Attitude has undertaken to meet up with a few of these weirdly-shaped and strangely flavoured writers, some well-established, others emerging, so that you, dear reader, can find out more about them without endangering body or soul.

Welcome then, to the Thrillers With Attitude Literary Smorgasbord.

My guest this week is author, Richard Thomas.

Hi Richard, thank you for agreeing to take part in the Literary Smorgasbord. Please tell us a little bit about yourself – what were you like at school?

I was always an outgoing kid, involved in sports, an avid reader and writer since grade school. Later, in high school and college I tended to be the guy that crossed over, hanging out with jocks, artists, intellectuals, etc. I’d like to think I’m a bit of a Renaissance man. Or as some may say, “jack of all trades, master of none.”

Tell us about the evolution of Richard Thomas, the author.

Been seven years of writing, taking classes online, getting my MFA, and reading all the time. I’m constantly filling up the creative well, so I never feel empty, and that means music, television, film, art as well as books. Early on I didn’t have much faith in my work but when I took a class with Craig Clevenger, he encouraged me to send out a story I wrote for that class, Stillness, which ended up in Shivers VI alongside Stephen King and Peter Straub. That gave me the boost of confidence I needed. Every time a new story gets accepted, I have a little bit of proof that I’m succeeding, evolving, doing well, retaining my voice. It took a lot for my novel, Disintegration to get out—three years of writing, editing and workshopping, a year of small press rejections (40+), a year to find an agent (100 passed) and then another year hitting the big six, getting really close, finally landing at Random House Alibi, where they’ve been just great. It’s a tough business, but it’s very fulfilling.

When did you first describe yourself as a writer?

Interesting question. The first couple of years I was publishing I didn’t call myself a writer. I think maybe about year three or four, with a few dozen stories out there, my MFA completed in 2012, and when my first novel dropped, I probably felt okay saying it then.

Your latest book, Disintegration, is described as neo-noir.   I’m a big fan of noir, but this was the first time I’d heard the term neo-noir – it sounds exciting.   Can you explain what the term means and how you came to be writing in this style.

It just means new-black, but to me that’s the sweet spot between classic noir and classic horror, the key being the word “new” meaning you have to do something different—a new monster, a new format, new language, something to separate what you’re doing from what’s been done the past 100 years. It takes the mood and tone of noir and adds in the terror of horror, as well as the tension of crime and mystery, but it can also include the world-building of fantasy, and the technology of science fiction, the regional lore of Southern gothic, etc. The first anthology I edited, The New Black, is a great example of that range of neo-noir, and Laird Barron writes a fantastic foreword that explains the history really well.

Disintegration took six years to write.   That’s a long time to be living with a book inside you, Richard.   I’ve got a few questions about that – why did it take so long; were you working on anything else at the same time; and finally, do all of your books have such a lengthy gestation period?

It was mostly the process of getting it published. I wrote the first half over my first semester at Murray State University with Lynn Pruett. Then when I switched to Dale Ray Phillips (you have to have at least two professors there) he asked the class first day if they’d continue to read my novel based on the first page. Nobody said they would, including him. He said it wasn’t, “thesis material,” which just means not good enough. I put it aside for a year and a half to write literary short stories under his guidance (the guy was nominated for a Pulitzer) and it was well worth the time. Then it was submitting to small presses, then to agents, then to the big six. We got really close a number of times, including losing a board vote by one vote. I did write other short stories during that time, it helped me to not go insane. I’ve got over 100 published to date, and I know I wrote a lot during that time of waiting, and failing, and submitting, and hoping. I wrote the second book in the Windy City Dark Mystery Series this past December, in about 25 days, so no, it doesn’t usually take me six years.

Are you inspired by any writers in particular?

Oh God, so many. Will Christopher Baer, Craig Clevenger, and Stephen Graham Jones really inspired this book, Disintegration, the style and voice. Stephen King is the author I’ve read the most, over 50 books, he’s a great storyteller. Chuck Palahniuk woke me up, showed me what you could do. And then in my MFA program I read authors like Flannery O’Connor, Denis Johnson, Mary Gaitskill, Cormac McCarthy, William Gay, Joyce Carol Oates, Haruki Murakami, and Toni Morrison—they all influenced me. Really, every author I’ve published in The New Black, Burnt Tongues, Exigencies, and The Lineuup—they all inspire me.

What are you working on right now?

What is it about?

This series is a little different. First book is set in Wicker Park, a neighborhood here in Chicago, the second in Logan Square. Each book has a different protagonist, but the same mood and tone, all set in Chicago. It’s more like Stephen King and small town Maine novels than a traditional mystery series.

How much research do you do?

Depends. If it’s a subject I don’t know much about, such as guns, or insects, or Chicago gangs, or local flora and fauna, I do a good deal of research. I also try to use as much of my own experience as possible. Living in Wicker Park for ten years, I can add a lot of detail.

What are your thoughts on reviews – good and bad?

I love it when a book resonates with a reader, that makes my day. I try not to dwell on negative reviews, but I do read them, and if it’s something I can improve upon, I work on it, for sure.

What’s been your best writing moment so far.

Wow, that’s hard to say. Getting my MFA was pretty cool, any time I publish alongside Stephen King, it’s very exciting (done that four times now, in Shivers VI, Qualia Nous, Cemetery Dance #72, and Chiral Mad 3). When readers reach out to tell me how much fun they had reading a story or book, when it inspires them to stick with it, or work harder, or keep submitting.

What are your ambitions, writing wise?

I want to be a full-time writer, and I’m not quite there yet. I think if I can sell film rights, and several studios are reading Disintegration right now, that the kind of money I COULD GET from that would really set me up to just write. For now, I write stories, novels, teach, write a column at LitReactor (Storyville), and travel to workshops, conferences, etc. I’m getting close, but it’s still a long way from a hobby to a full-time job. If you make $20,000 a year with a writing hobby, that’s pretty good money. If you make $20,000 a year as a full-time writer—not so much.

What is your writing routine?

How do you measure progress – pages, words, lines, time…?

When it’s done. Nothing else really matters. I wrote a 6,000-word story the other day, and it was a great day, figured out the story and theme, got a nice hook and twist in there, and the prose came together nicely. That was a success, I think.

What is the Richard Thomas writing method?

I usually start with an idea, a philosophy, an emotion, or a fear. I don’t plot. So I sit with that idea, and then I think of what I’ve done before, what haven’t I done, where I could set it, who my protagonist(s) is/are, and then I start with the most compelling scene. I pay attention to my narrative hook, and then I just work on the conflict, increasing tension, which hopefully leads to a satisfying resolution. Setting is important to me, all five senses, so I try to write dense stories that are also entertaining, easy to get through.

What inspires you to write?

I love telling stories, transporting people to another place and time, and making them go through whatever my protagonist goes through, so hopefully they FEEL something powerful.

Any advice for aspiring authors?

Read widely, and in your genre especially. Read the masters and then new voices, too. Write short stories, and in a wide range of genres, as you try to find your voice. When you send out your work, send it to a lot of places (assuming they are the right markets, applicable) not just 1-2 magazines, and don’t give up easily, stick with it. My story in Cemetery Dance got rejected 40 times before they took it. I had a story land at storySouth (3% acceptance rate) that had been rejected 100 times.

What are you reading right now?

Is there any one book you would like to have written?

There are two I give away more than any other—All the Beautiful Sinners by Stephen Graham Jones, and Kiss Me, Judas by Will Christopher Baer. Those two, I think.

If there was one person, either contemporary or historical, real or fictional, you could spend a day with, who would you choose and why?

Baer is such a recluse, I really wish I got to know him when he was teaching, online a lot. So I say Baer.

It changes day to day, but for now, I say Blood Meridian by Cormac McCarthy

I think it has to be Stephen King.

These days just a good cup of coffee, I think.

I could eat Thai or Chinese every day.

That’s so hard, but what I usually say is Blade Runner.

Just finished Breaking Bad a few weeks ago, so I’ll say that.

Man, I hardly listen to the radio.

Usually comes down to The Cure or The Smiths. I’m old school.

It’s been a real pleasure meeting you on the Literary Smorgasbord, Richard. 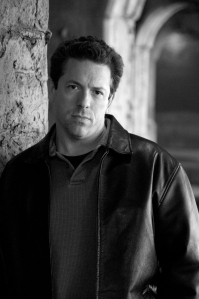 Richard Thomas is the author of Disintegration. Find out more about him at whatdoesnotkillme.com

One thought on “Thrillers With Attitude Literary Smorgasbord: Richard Thomas”